Clearly thriving in a growing wearables market, Xiaomi saw its unit sales increase by a staggering 90.9 percent when compared to the same quarter in the previous year — for a total of 6.9 million wearable devices sold. The IDC attribute this largely to the launch of the Mi Band 3, and Xiaomi’s expansion outside of its home territory of China. While Chinese sales still make up 61 percent of Xiaomi’s shipments, this number has fallen significantly from the usual 80 plus percent — and this shows Xiaomi has successfully grown in other markets, including India, Europe, the Middle East, and Africa.

The End of Life for Android ICS

Ice Cream Sandwich (v4.0) was initially released in October 2011 and now has a small number of users.

Of the over two billion active Android users, those running ICS only represent 0.3 percent according to Google’s latest distribution information as of October 26th, 2018.

Here’s every phone that supports 5G in the future

5G connectivity is the future of mobile internet, and you probably heard about the huge increase in speed with the new standard it brings. But not every phone will be available with 5G speeds. In this post, We will list every phone that supports 5G in the future.

Even we have the technology in front of us, there’s still a way to go until 5G is as ubiquitous as the widely available 4G, and we’re still taking our first baby steps into a faster future. Whether you think we need it or not, we’re going to see more vendors start taking the new 5G standard — and we expect to see the first commercially available 5G phones in 2019. Here is every phone that supports 5G, and a whole bunch of rumors about some that might.

There is absolutely no doubt Apple will pick up 5G eventually, the only question is “when?” At the moment, the whispers indicate that the iPhone giant won’t be looking to release a 5G iPhone until 2020 — so expect 5G capabilities on the iPhone XIS, or whatever numerically nightmarish name Apple adopts.

5 Reasons to Wait for the Pixel 4 & 4 Reasons Not to is a post by Cory Gunther from Gotta Be Mobile.

There are several great Android phones available right now or coming soon. You probably have your eye on the Google Pixel 3 XL, the OnePlus 6T, or even the upcoming Galaxy S10. That said, many of you might want to think about waiting for the Pixel 4 and Pixel 4 XL next year.

This was a big year for smartphones. Screens are bigger than ever, bezels are tiny with cameras inside notches, and the competition is strong.

You have your choice between several great devices in 2018 and there are plenty of reasons for buying some of those now or even next year. That said, you’ll want to keep your eyes on all of the stunning phones that are in the works for 2019.

For one, the Galaxy S10 launch is probably less than two months away, Apple iPhone 11 rumors are starting to swirl, and we’re already seeing signs of a Pixel 3 Lite before the inevitable Pixel 4 release.

As you probably know, Google is likely already working on a brand new Pixel for 2019. Those, of course, are the Pixel 4 and a bigger Pixel 4 XL. And while these phones are probably still 8-10 months away from a release, we’re already starting to hear whispers and rumors.

According to AndroidPolice Google is already using codenames like “Sargo” and “Bonito” for unknown devices. The Pixel 4 could be codenamed Sargo, although that could easily be the Pixel 3 Lite or another product as they work toward releasing Android Q, the future, and upcoming apps.

Sargo is the name of a big white fish, and Google typically names devices after fish internally. At Google HQ the Pixel 3 and Pixel 3 XL are known as “blueline” and “crosshatch”, two other fish species. Even the original Pixel is known as Sailfish and Marlin.

Obviously, it’s still far too early to speculate and the Pixel 4 is in active development which means things will change drastically over the coming months.

Either way, early rumors point to some exciting changes, finally more than one camera on the back, and an edge-to-edge display that can rival the best of the best. Not to mention previous years give us an extremely good idea of what to expect, the Pixel 4’s release date, and a few more things.

There are some very tempting phones available right now, and in this guide we’ll take you through the best reasons to wait for Google’s Pixel 4 and why you shouldn’t wait and look elsewhere today.

Google is still new to the world of making hardware and phones. We're on the 3rd Pixel, while Samsung and Apple are on 10th generation smartphones and beyond. Each year Google has made big improvements to the hardware, display, software and more. Basically, wait for a bigger, better, faster Pixel 4 or Pixel 4 XL.

The Pixel 3/3XL is the most powerful smartphone we've ever seen from Google. The device offers excellent performance, outstanding battery life, a huge vibrant display, double the storage, and a high-end camera paired with some of the best software camera and AI features around.

Google's Pixel 3 XL is good enough for almost everyone, even with that huge notch, but some of you might want to stick around for what's next. That's what I'm doing.

We don't have a full spec sheet yet, but you can expect the company to make significant upgrades that follows the path of Samsung, Apple, OnePlus and more.

You can expect an even bigger screen with no notch, or at least a tiny notch like the OnePlus 6T or Galaxy S10. Maybe we'll even have a cutout for the single front-facing camera, unless Google sticks to dual front cameras again. We'll get a new processor with improved performance and gaming, better battery life, Android Q, and a great camera.

If you aren't thrilled with the Pixel 3 XL design just know that something better is coming next year. There's no way things stay the same, especially with what we're seeing from the rest of the competition. The phone will be all screen in the front, and we have to assume it'll have at least 3-4 cameras.

And hey, maybe they'll return the headphone jack like we're seeing so far from the Pixel 3 Lite. That's not all, so keep reading in our next slide for even more information.

5 Reasons to Wait for the Pixel 4 & 4 Reasons Not to is a post by Cory Gunther from Gotta Be Mobile. 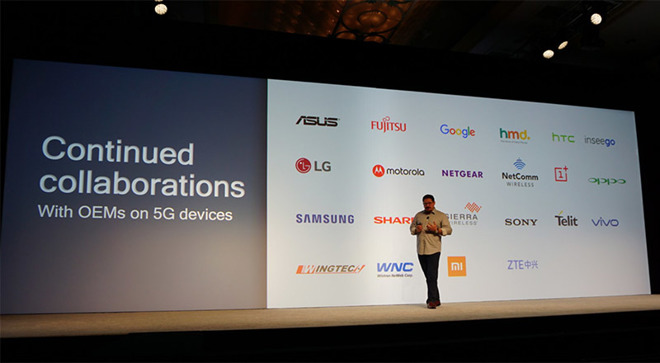 Providing insight into the future of smartphone technology -- and taking a jab at Apple -- Qualcomm President Cristiano Amon said that by the end of 2019, all Android handset makers will have at least one flagship device capable of accessing speedy 5G networks. Apple's iPhone is not expected to make the leap to 5G until 2020.

Pixel December Android Pie Update: What to Know is a post by Cory Gunther from Gotta Be Mobile.

The December Android Pie update is now available for Google Pixel devices and Oreo for Nexus users, and here’s what owners need to know. We’ll go over what to expect, what’s new, what changed and more with this new software.

Each month these updates improve security, and occasionally fix a few bugs or problems. And while every device will benefit from this round of updates, the December Pixel 3 Android Pie update is massive.

Basically, many Pixel & Nexus owners will get an updated version of Android this week. Keep in mind that some older devices are no longer supported, or are only getting Android 8.1 Oreo while newer phones receive Android Pie updates and stability enhancements.

This is an important update that will affect your device and its performance. Most notably, those with the Pixel 3 XL. Like we see with updates at the beginning of each month, we’re getting a few security enhancements, stability changes, and multiple critical security patches, plus a few bug fixes.

Right on time, Google confirmed the update on Monday, December 3rd, and immediately released the update to users and for developers. We’re already seeing OTA updates as well.

Google shared more information on the Android security bulletin, as well as the Pixel/Nexus security page with details on every single change. However, we’ll highlight the most important stuff below for owners. You can get factory images and install it manually too if you’d like.

Google’s main effort is security here, and occasionally they patch bugs or fix problems. However, the Pixel 3 and Pixel 3 XL are brand new, and they’re taking this opportunity to fix a slew of issues. From camera performance, memory problems, always-on display issues and more. That’s on top of all the usual security patches and extra protection.

Google continues to take monthly updates very seriously, which is good to see. These are function updates, not just software tweaks. And while we found a bunch of minor security exploit patches, it’s the huge bug-fixing list that owners need to pay attention too. Basically, you’ll want this update ASAP.

While it’s no secret that the Pixel 3 has more than a few problems, they’re almost all getting addressed today. This is an impressively massive list of bug fixes. More than we’ve ever seen from Google in one monthly software upgrade.

The most notable changes are improvements are to the camera or shutter performance, audio improvements, USB-C device detection, and improved memory performance. The memory issue is the biggest complaint for the Pixel 3, so expect vastly better performance and multitasking after the December update.

As you can see, most of these changes are for the Pixel 2/2XL and the Pixel 3/3XL both.

If you’d like to get this newest version of Android for your Nexus or Pixel device now, instead of waiting, you can download or flash it from the links below. That said, we’re already seeing the update hit most devices, so we recommend waiting for the OTA instead of manually downloading the files.

Google usually delivers these updates right away, or within 24-48 hours of the announcement. So while my smaller Pixel 3 and my old Pixel XL both got it the afternoon of December 3rd, some may end up waiting a few days. We recommend waiting, or you can get it from the links above.

I went to Settings > System > System Update > Check for Updates and got it immediately. This pulls the update from Google’s servers to your phone. The entire process took less than 10 minutes. From downloading to installing and rebooting my Pixel 3 on Android Pie.

In closing, this update is extremely good news for Nexus and Pixel owners, but mainly those with the new Pixel 3 or Pixel 3 XL. It finally fixed some major memory management issues, sound problems, and a variety of other complaints. Just like we knew it would.

Essentially, expect an update on your Nexus or Pixel device in the coming days if you didn’t get it already. And remember, this only applies to Google’s Nexus and Pixel devices. If you have a phone from Samsung, LG, or Motorola, this doesn’t apply to you. They are still waiting for the original Android Pie update and probably won’t see it until 2019, unless you join a beta program.

So what’s next? Well, Google released Android 9 Pie in August, and we could see Android 9.0.1 or 9.1 at some point in early 2019. That said, the company could jump right to Android 9.1 Q in March with a new developer preview, but we’ll have to wait and see. Either way, a few more updates will arrive in January, February, and March as Google starts work on the next milestone software release.

If you’re still experiencing issues on Oreo with a Nexus device you should check out this post for more help. Or, we have some Pixel Android 9 specific fixes and advice too. For now, stay tuned for more details and drop us a comment below with any questions or concerns about this December Android Pie update.

Pixel December Android Pie Update: What to Know is a post by Cory Gunther from Gotta Be Mobile.